We will cover these main sub-systems in this order:

People move between cities to find the best living conditions. You can use the immigration report (by clicking on "Immigration" on the city info panel) to find out how well the city is attracting and keeping citizens.

"Outside settlers" are a special case of immigration. They come from off the map and not from another city. Every player receives a bonus of up to two groups of outside settlers of 1,000 every turn.

The happier a city is, the more work they produce, and the more immigrants you attract.

The presence of public space, and free time to enjoy the public space, are most important for making happiness go up. Luxuries also help, but to a smaller extent, and only if the citizens can afford them.

If a city becomes very unhappy, it will leave your country and become an independent city of rebels, a phenomenon colloquially known as "going pirate." Rebels can be identified by the stench of garlic, dirty pubs, a tendency to attack without declaring war, bootlegging, and liberal attitudes about sharing music. Thus, try to keep you people happy at all costs.

The "This city needs:" clues at the bottom of the city info panel will give you important hints for keeping your city happy. Read the survival guide for detailed help.

A city's culture not only directly contributes to your final score, it also allows a city to build more advanced options.

These things all raise your city's maximum culture level:

Work is used for:
Work is produced by adults. The longer the work day, the more work is produced. However, longer days can also make people less happy, which reduces their output. An 8-hour workday is a good compromise to start with. You can change the work day by clicking on "work day" in the city info panel.

A city needs to claim land or sea so it can:
The closer land is to your city, the less work it takes to claim it. This work is used up every turn, which means that sprawling cities will need a lot of work to hold on to their land, whereas compact cities will not. A medium-sized city is usually a good compromise.

Each turn, your city works each land, starting with the land closest to the city. If the city has a work shortage, the outermost lands are usually unclaimed first.

Goods is a generic term that includes food, durable goods (such as clothing), luxury goods (such as jewellery), and building supplies. Prices tend to go up if the city needs more of the good, and down if the city has more than it needs. Price mainly affects trade between cities, but low work prices can limit a city's ability to consume luxuries, durable goods, or even food. Prices give you a general idea of the recent economic history of a city and help you craft your future plans for a city.

To keep the interface simpler, services are lumped together with goods. Services are non-tangible benefits that must be immediately used and cannot be traded, mainly: work, housing, public space, and trading capacity. 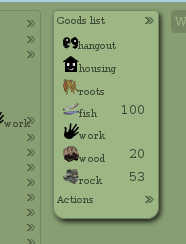 There are several ways that goods can get into your city:
A city loses goods because:

A food rating of 100% tells you that your city's citizens have well-stocked cupboards. If the food rating falls below 10%, people will begin to starve.

A city usually has three favourite foods. Its citizens insist on purchasing favourite foods before other types of foods, which can affect prices and supply. If a favourite food is unavailable for a long time, it may be replaced by a new favourite.

Most durable goods and luxuries are produced by large workshops that require a lot of work to run and a high culture to build. However, there are smaller workshops that can be used earlier in the game to produce clothing and pottery.

If your city has trading ships, then some of the families living in your city will try their hand at starting their own trading empires. They will export low-priced goods and import high-priced goods.

If any nearby city has its own trading capacity, then their merchants may start trading with your city. This is most often helpful for your city, but it usually profits the trading city more than the trading partner.

As time goes on, trading families gain in experience and power. It can pay handsomely to start a hub of trade early in the game so the families have more time to learn their trade. However, keep in mind that the traders' first priority is profit, not patriotism. If another city offers better trading conditions, you may find some trading families moving their shops across the border.

Successful trading families may devote their extra energies towards developing your city's cultural life, setting up new businesses for their children or cousins, or penning their own literature.

What features make a city more attractive for trading families? A fleet of trading ships, mountains of cheap surplus goods for exporting, and many nearby cities without traders and with gross imbalances in supply and demand.

Figuring out exactly what traders are doing on the streets and shipping lanes can be nearly impossible for a leader of your lofty stature. However, you can glean some clues by reading the goods report (available from the bottom of the goods list), as well as by noticing information on the city info panel, such as high society and major imports and exports. The goods report also contains an option allowing you to sponsor a new trading company, which is rarely useful.

Your pawn can also carry goods from city to city. You can obtain initial goods through taxation or larceny, and multiply your wealth by buying low and selling high. You can then use your pawn's inventory to hasten a city's building projects or to boost its local economy in tough times.

You can tell a city to change its landscape, including the construction of housing, planting farmland, enriching natural terrains, founding workshops, and relocating the city centre. The higher a city's culture, the more options are available to it. Cottages have very low culture requirements, whereas orchestras have very high culture requirements. If you told a tiny village to build an orchestra, you would see the planned orchestra blinking on the map, but the village could not build the orchestra until it grew large and cultured.

Once the culture requirements are met and all the needed materials have been gathered, the city will start to use its unemployed citizens for construction.

The strength of your cities depends heavily on how you plan them. Keep in mind that bigger farms or workshops can take a lot of work to run them. Also, it is often wiser to save fertile land (forest and grassland) for farms, and place housing and workshops on less desirable land. Placing a building or farm on a fertile land "uses it up." It takes a long time to make infertile land fertile again.

Cottages are an unusual housing type: they can only be built on fertile land, and they themselves are considered fertile, so you can later build farmlands over them.

Learn more about the three groups at work in each Ludopolis game: